Animal husbandry steady growth is maintained at 4% - Ministry of Agriculture of the Republic of Kazakhstan, Nur-Sultan. May 27, 2020 B2B - Oxana Dementiyevskaya 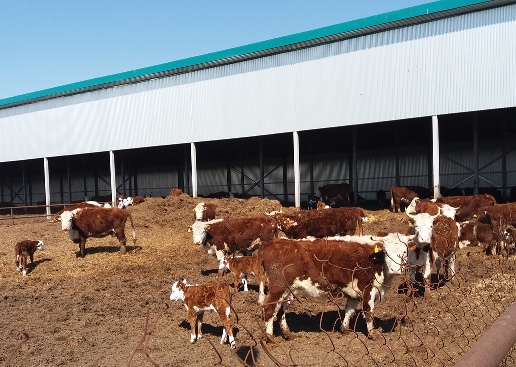 The measures implemented last year through lending and additional subsidies gave their effect. According to the Ministry of Agriculture, for four months of this year there has been a positive trend in the growth of livestock: cattle by 4.1%, sheep and goats by 2.7%, horses by 7.6%.

“Meat production increased by 3.6% and amounted to 314 thousand tons, milk by 3.2% and 1.5 million tons. Egg production decreased by 6%, due to lower demand in foreign markets,” - Saparkhan Omarov said.

According to the plans of the Ministry, an additional increase in livestock production by the end of the year is expected at 4.2% or 2.6 trillion tenge. For 4 months, the gross output amounted to 656 billion tenge.

According to S. Omarov, ithe main measures in the beef stock farming sector are aimed at increasing the breeding stock of cattle. In 2018, a loan program for farmers for the purchase of breeding stock was launched.

“During this time, more than 1.5 thousand farms received loans and purchased livestock. In the medium term, the task is to develop anchor cooperation with the involvement of multinational companies. The expected volume of investments due to the creation of farms will be 350 billion tenge and bringing beef exports to $370 million by 2025. More than 42 thousand jobs will be created by farms,” - the minister said.

In livestock farming, three main indicators have been identified:

For 2019, 63 thousand head of cattle were imported by farms. As a result, the proportion of breeding stock increased to 12%.

“This year we plan to lend to farms for the purchase of 95 thousand heads. In general, region akimats need to intensify work on involving farms for the purchase of cattle, including with ready-made infrastructure. Last year, a credit mechanism secured by acquired livestock was tested on a pilot basis, and this year this mechanism is used everywhere,” - Saparkhan Omarov said.

An important component is the continuous operation of the beef production chain. The country already has a network of feedlots for 279 thousand cattle places and meat processing plants for 240 thousand tons.

To ensure their loading, a plan for the delivery of calves is provided. The sales season falls on the autumn periods, however, since the beginning of the year, farms have sold 41.7 thousand calves to feedlots.

In addition, to encourage farmers, a subsidy mechanism has been introduced for the live weight of a bull sold to an industrial feedlot or meat processing plant.

In addition, for meat processing plants and feedlots, financing of working capital replenishment is provided in case of availability of an export contract.

To ensure year-round operation of the enterprise, it is planned to create a network of feedlots in five regions. For these purposes, the Ministry has already provided subsidies for part of the investment into the feedlots construction.

“Over the past year, 1,059 farms were financed for the purchase of 374 thousand heads of sheep. In this year according to the plan, we will credit the purchase of 360 thousand heads. In fact, 28 thousand goals have been financed at present,” - the Minister of Agriculture said. Sheep breeding has a great prospect in increasing exports. Kazakhstani exporters have positive experience in supplying Kazakhstani lamb to the markets of the Persian Gulf and China.

But taking into account the low interest of farms in increasing the number of livestock, the Ministry revised the existing measures to support sheep husbandry. Subsidy mechanisms are finalized. The corresponding draft amendments are being approved by government bodies.

In the dairy livestock sector, in accordance with the task of import substitution, projects are being implemented to create and expand a network of dairy farms. In 2019, 8 industrial and 14 family farms with a capacity of 44 thousand tons of milk were introduced (for comparison, only 3 commercial dairy farms were introduced in the republic in previous years). However, there is import in the amount of 464 thousand tons.

The Ministry faces an ambitious task for the annual implementation of 25 industrial dairy farms. In general, over five years it is planned to completely close the issue of import substitution by increasing the processed milk by 500 thousand tons.

Together with the region akimats, potential projects for the construction of commercial dairy farms were worked out. This year the regions proposed potential projects for the construction of 29 industrial commercial dairy farms and 39 modernization of family farms. This year, financing will be carried out from additionally allocated 400 billion tenge under the Economics of simple things program.

At the same time, the Ministry jointly with Kazagro JSC has revised pledge requirements for financing investment projects, introduced a mechanism to guarantee up to 85% of the loan amount of second-tier banks in case of shortage of pledge during the investment project implementation, as well as financing for the acquisition of cows, machinery and equipment secured by incoming in the future.

“For investors who have launched commercial dairy farms, support will be provided in the form of subsidizing part of investments in the investment project, as well as reducing the cost of milk sold for processing,” - Saparkhan Omarov said.

The ministry also conducted an analysis of the main grain-growing regions and revealed that 270 farms with a total area of about 4 million hectares of arable land do not engage in animal husbandry. This potential must be used, since they have experience in the production of feed, which is a great advantage when implementing livestock projects.

In addition, last year, poultry meat production increased by 14% (223 thousand tons) due to commissioning of one new poultry farm and the modernization of five projects. However, the share of imports in consumption is 45%. Further measures will be continued for import substitution of poultry meat through the commissioning of new capacities.

In the medium term, it is also planned to implement 12 projects of broiler poultry farms with a production capacity of 174 thousand tons. Due to these measures, as well as the full utilization of poultry facilities, poultry meat production will be increased 2.2 times. Initial investments will amount to 110 billion tenge. 4.7 thousand jobs will be created.

As the Minister of Agriculture emphasized, pork production is a promising direction in increasing the export of livestock products. In 2019, the Ministry carried out work to confirm the status of a country free of African swine fever at the level of International Office of Epizootics. A veterinary certificate was also signed with China for the export of pork. In 2019, the first stage of inspection work was carried out by the Main Customs Service of China.

“Within the framework of the Comprehensive Plan for the Restoration of the Economy, work is underway to coordinate the inclusion of Kazakhstani enterprises in the register of importers with the Main Customs Service of China. Thus, by the end of the year, pork supply to China will be arranged,” - Saparkhan Omarov assured.

Thanks to these measures, interest from foreign companies in investing in pork production has increased. Currently, 11 projects with a capacity of 187 thousand tons are at the implementation and design stage. 6 projects are under construction. Most projects have private investment. In general, due to these projects, it is planned to ensure a 2.7-fold increase in production volumes in the coming years. The volume of investments will be 271 billion tenge. An additional 3.8 thousand jobs will be created.

The Ministry, together with the regional akimats, is taking measures to attract multinational companies and strategic investors in the sector of processing livestock products on an anchor basis.

Negotiations are underway to bring Tyson Foods to the beef processing sector. At the design stage, Bauman's lamb processing project is underway.

In addition, by the end of the year, 2 modern meat processing complexes in the cities of Nur-Sultan and Kostanay will be commissioned. Financing of a project for industrial fish farming has begun with the AGCO American company. In the milk processing sector, negotiations are underway with the United Green company to implement an investment project.

In general, the implementation of these projects will allow attracting additional investments in the amount of 717.2 billion tenge.