Investors are welcome to agriculture 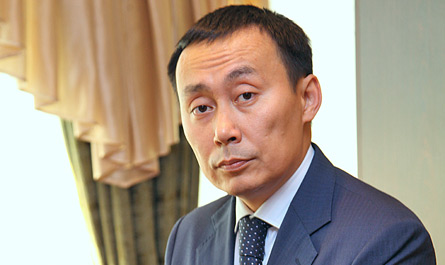 Long-term targets of agricultural development are set in the "Kazakhstan-2050" strategy and the Strategic plan for development of the Republic of Kazakhstan until the year 2020. In accordance with the strategic documents for the agribusiness sector, the following figures are extremely critical: by 2020 the labor productivity in the agricultural sector will increase at least 4-fold; wheat yield will reach 1.4 tonnes per 1 hectare; share of domestic production of food products will be 80% of the total volume of their resources. To achieve these figures, "Agribusiness 2020" program is being realized for the development of agribusiness sector of Kazakhstan in 2013-2020. Overall, an amount of 3 trillion tenge was allocated for 8 years of the program, which is expected to allow the industry to attract more than 10 trillion tenge of private investments. This and many other things were explained in an exclusive interview to "Expert Kazakhstan" with the Minister of Agriculture Mr. Asylzhan Mamytbekov.

— Mr. Asylzhan Sarybayevich, which guarantees do foreign investors taking the risk to invest in our agriculture get? What are the "rules of the game" in terms of laws on land and land use?

— First, I have to mention the favorable investment climate in general. So, the protection of investments in Kazakhstan is provided by the Law of the Republic of Kazakhstan "On investments", which guarantees the rights of investors and the stability of contracts, and favorable conditions are created by public authorities. We are continuously taking down administrative barriers: public services are standardized and automated, the time of issue and the numbers of permits, etc. are reduced. In addition, since 2014 we have unilaterally initiated a visa-free regime for citizens of ten countries to enhance business contacts and international operations. I want to stress that Kazakhstan is considered to be one of the leaders among CIS countries in terms of favorable conditions for investors. This is evidenced by the international ratings of Doing Business, where in terms of "Ease of doing business" Kazakhstan takes 77th place, in terms of "Protection of minority investors" - 25th position among 189 economies in the world.

For agribusiness, the ideal guarantee is its priority in governmental policy, as evidenced by the preservation of tax benefits, increased subsidies and lending to the agricultural sector. Today, VAT in Kazakhstan is 12%, while in Russia - 18%, and in Belarus - 20%. What's more, companies processing agricultural products pay 70% less. In addition, all farmers, both domestic and foreign, can enjoy an existing benefit for special tax regime, which involves a reduction of 70% payment on all types of taxes except for the land and the individual income tax at the source of the taxable income.

Last year, a tax reform for agribusiness was introduced resulting in private farms to become exempt from personal income tax on sales to legal entities; VAT refund can be provided to procurement organizations purchasing products from private households and small farmers; conventionalism in special tax regime was eradicated.

Coming back to your question, and specifically to rules of the game for the land use, previously foreigners and companies with a majority of foreign ownership could receive agricultural land for a maximum of 10 years, and since December last year the maximum term is 25 years. This period is more attractive to foreign investors as it will provide a greater assurance that their investments will pay off.

— Could you please describe a portrait of a potential foreign investor in agribusiness? What size should companies be? Which countries will investors come from, to your mind?

— It should be mentioned that business opportunities attract investors. Production and marketing of agricultural products involve huge land resources, favorable geographical position of Kazakhstan, as well as market capacity of EAEC and China.

In my opinion, the foreign investor in the agricultural sector is primarily a company with experience in agriculture and high culture of new technologies and knowledge, and size here should probably not be decisive. We believe, Kazakhstan is of interest primarily for investors from the EAEC, as there are practically no economic boundaries, there are no language barriers, and specifications are unified, and so on. For the second group, we consider investors from countries with highly developed technologies, which expect a profit based on their technology. Here we talk about companies from the EU, Ukraine and the United States.

The third group includes investors who are interested in the production and importing of high-quality products from Kazakhstan, for example, the Arab companies.

— Do we already have examples when foreigners have invested serious money in our agricultural industry and processing?

— At the moment, three projects are being realized with the support of JSC "NMH "KazAgro". The projects value is 8 billion tenge, or 49.7 million dollars, with direct foreign investment totaling 2.3 billion tenge. Among them are two farms, a reproducer for two thousand heads of cattle in the Akmola region (LLC "Kazbeef Ltd"), reproducer farm for 3,000 heads of cattle in the Kostanay region (LLC "Global Beef") jointly with the American company "Global Beef Investors" and a feed mill with capacity of up to 36.8 thousand tonnes of fodder per year (LLC "Agrotrading-2007") jointly with the German concern "Agravis AG".

Also, well-known successful projects in the agricultural sector by world leaders in the production of high-quality milk products are with the French company "Danone" (LLC "Danone Berkut") and "Lactalis" (LLC "Food Master"). The success of such companies in Kazakhstan evidences the attractiveness of the country's agribusiness for foreign investors.

Russian holding "Efko" started a project to launch oil and fat plants in Almaty and North Kazakhstan regions with total capacity of 660 thousand tonnes of oilseeds per year. It is expected that the fat and oil plant will be processing sunflower, rapeseed and soybean. The project investments is 26.6 billion tenge. Project implementation period: 2015-2017. "LLC "KazGluten Co" investment project is being realized jointly with the Chinese investors. The project involves construction of a glucose and fruit syrups plant with capacity of 100 thousand tonnes of wheat a year. Project cost is 18.5 billion tenge. Project implementation period: 2014-2016.

Moreover, the memorandum of understanding was signed between JSC "NMH "KazAgro" and the Hungarian Export-Import Bank to establish a joint fund to finance agricultural projects, the purpose of which is to invest in projects of agriculture, including the food industry projects.

— What areas do you think promising in terms of investment in domestic agriculture?

In general, a variety of climatic conditions of Kazakhstan allow harvesting almost all kinds of crops in the temperate thermal zone and breeding all kinds of livestock. Kazakhstan is one of the major players in supplying wheat as the main export item for the Central Asian countries. It is rich in land for the cultivation of oilseeds, corn, fruits and vegetables. According to OECD, the export potential of Kazakhstan in meat has obvious advantages thanks to the huge resources and geographical location. Kazakhstan borders the two countries being among the top ten world's largest beef importing countries - Russia and China. The total volume of beef imports for these two countries in 2014 amounted to more than 1 million tonnes worth more than 4 billion dollars. Processing industry is the most unrestricted niche for business, because there is the opportunity for import substitution, if the resource base continues to expand, and high technology with efficient management are introduced.